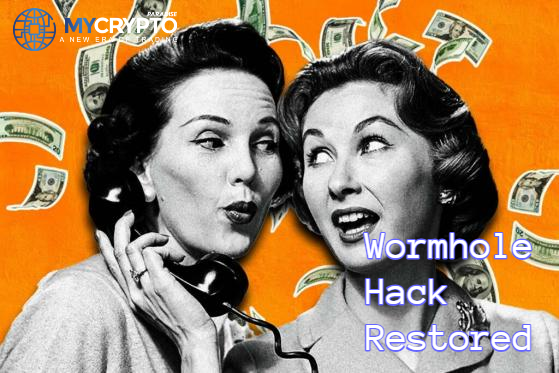 Popular cross-chain crypto bridge Wormhole has announced on Twitter that it has restored the $320 million stolen by hackers.

The blockchain bridge had fallen victim to hackers who siphoned 120,000 Wrapped Ethereum (wETH) out of the protocol.

In what appears to be a big sigh of relief, Wormhole’s leaders have confirmed that all funds were restored, and the protocol is back up. The tweet continued to thank users for their support and patience and promised to release a detailed incident report of the hack.

Elliptic, a blockchain analytics company, had disclosed that Blockchain bridge Wormhole had offered the hackers a $10 million bounty to return the stolen funds. It appears that this did not eventuate, as Bleeping Computer reports that the attackers still have over $281 million worth of ETH in their wallets. However, Wormhole still found a way to recover the lost Ethereum.

In this hack, Jump Crypto of the Jump Trading group was Wormhole’s knight in shining armor. Jump said that it believed in a multichain future that is essential infrastructure. For this reason, the company generously replaced the 120k ETH claiming that it wanted to make community members whole and support cross-chain crypto bridge Wormhole as it continued to develop. It is unknown whether there were other terms behind Jump Crypto’s action.

There has been quite a rise in crypto platform hacks lately. Wormhole’s hack was the second-largest DeFi attack after Poly Network. Poly Network lost roughly $611 million last August to hackers. However, in Poly Network’s case, the attackers eventually returned all the money.

DeFi platform Qubit Finance lost $80 million worth of Binance Coin to hackers last month. The attackers are yet to return the money despite Qubit reaching out to them, asking for negotiation on what the hacker may want.

Still, in January, Singapore-based crypto exchange Crypto.com reported an attack that led to a loss of $30 million from 483 customer accounts.