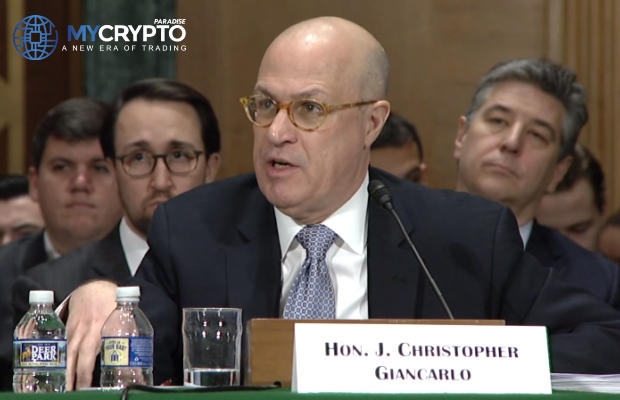 Christopher Giancarlo, the former chair to Commodity Futures Trading Commission (CFTC) has opened up a new think tank, aiming to encourage Americans on adopting the digital currency. Giancarlo has predicted that soon the fiat currency will become obsolete and the CFTC, that possesses a decentralized management system will replace them.

He argued that many economies in the rest of the world, have adopted the digital currency systems. The digital currency includes the use of Bitcoins, Etherium, and other altcoins, which, according to Wikipedia, totals up to 1600 in number.

Advocation of no harm regulatory approach

Giancarlo has so far, been bearing the ‘Crypto Dad’ title. It is reported that he has over time, advocated for a “no harm” regulatory approach for the crypto space. Giancarlo’s think tank’s name is the “Digital Dollar Foundation.” The main aim of the think tank is to brainstorm with other crypto enthusiasts for the digitization of USD.

The former CFTC chair, through the technology behind the success of bitcoin, believes that crypto will replace fiat. His advances have been primarily for the shift to the decentralized digital currency that utilizes robust blockchain technology.

A recent report stated that Giancarlo’s foundation aims at the need to research more, for the effectiveness of the adoption of USD decentralized digital currency. He suggested that there are potential benefits that will accrue to the US at large for the shift to the digital currency.

The consulting firm Accenture PLC is to partner with the Swedish central bank for their crypto-based currency known as e-krona. Accenture recently gave a hand to Giancarlo’s digital Dollar project for more research on the effectiveness of the adoption of the digital currency.

The digital Dollar foundation is to be launch as soon as Jan 16th, 2021. There are other co-founders including Daniel Gorfine, who is as well, an ex-CFTC official, and led in the fintech regulator’s research frontiers. Charles Giancarlo, brother to Christopher Giancarlo, is as well a co-founder of the digital USD research think tank.

Charles has worked previously at the Cisco system as well as the Silver Lake Partners. The think tank team is aiming at the provision of funding for the launch of the organization. At the same time, Accenture is on research and logistics of the foundation.

If you want to use the photo it would also be good to check with the artist beforehand in case it is subject to copyright. Best wishes. Aaren Reggis Sela