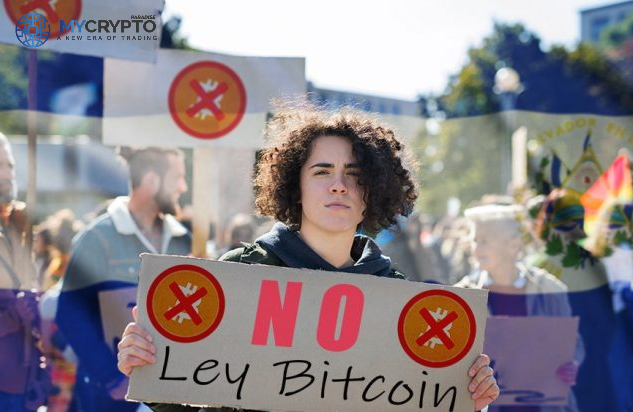 Not so long ago, El Salvador passed a Bitcoin Law that makes Bitcoin a legal tender that is acceptable to all businesses in the region.

Whereas this may be considered an extremely pleasant stride to the crypto industry and crypto enthusiasts alike, El Salvador citizens stood to be corrected.

A group of Salvadorans identifying as the ‘Block of Resistance and Popular Rebellion,’ alongside leftist unions, and student associations, took to the streets of the country to protest the new adoption. This comes at a time the country put three months ban on protests amidst the Corona Virus pandemic.

Gathered at the Legislative Assembly yesterday, the mob used banners and slogans to demand that Bitcoin be revoked as a national currency.

Statically speaking, about 77% of Salvadorans do not appreciate this new law.

One activist Idalia Zuñiga on the matter described the law as one possibly able to generate legal insecurity that could be used to defraud users and facilitate laundering.

Another protestor raised concerns on Bitcoin’s price volatility as below “For those earning a minimum wage, in one moment you may have $300 in Bitcoin and the next day those $300 can turn into $50.”

Justifiably, Bitcoin has suffered a deep plunge in prices from a $63,595 high in April to half that amount today.

Unsurprisingly, none of these concerns are new. Repeatedly, these have been issues circulating our news outlets for years with no close remedy in sight.

Also, most justifiably, citizens of El Salvador are in awe of how lightweight this issue was addressed. Normally, the bill would go through a strenuous process of study, consultations, and adaptations before being passed, but the Bitcoin Law took only six hours to get approved after President Nayib Bukele presented it to congress.

To them, this new law is just another reminder of how Nayib Bukele towers over all branches of the Salvadoran government.