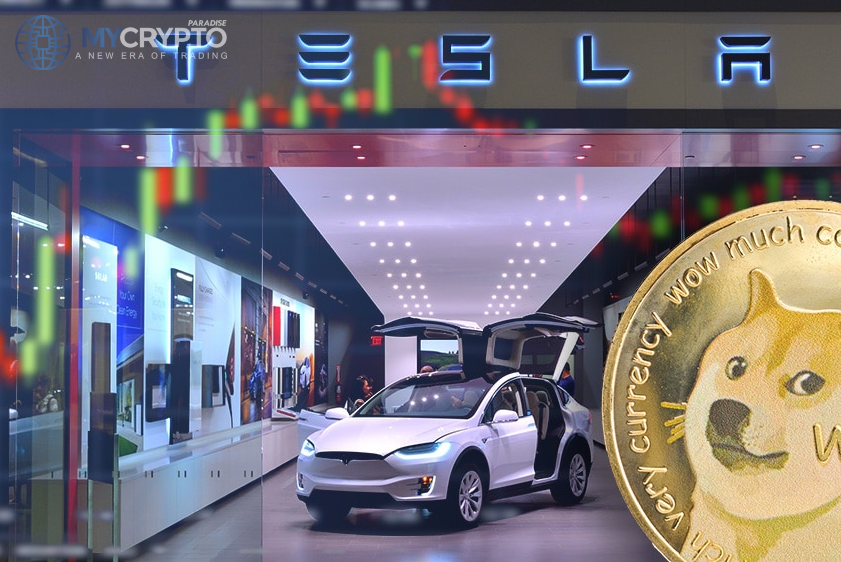 Tesla CEO Elon Musk revealed that the electric car maker would accept Dogecoin as merchandise payment. Musk passed on the message by tweeting, “Tesla will make some merch buyable with Doge and see how it goes.”

As expected, the Dogecoin price shot up following this announcement. The meme coin’s price surged by a whopping 33%.

Billionaire Elon Musk has been very vocal about his support for Dogecoin. He has, on many occasions, mentioned the oldest canine coin in interviews and on Twitter. Much of Dogecoin’s success attributes to the influence of crypto enthusiast Elon Musk.

It seems that the year could not end without one more stunt from Tesla CEO Elon Musk. In this instance, he went even further and incorporated Dogecoin into its company Tesla. Furthermore, Musk downplayed Bitcoin in the Doge payments announcement.

The Dogecoin community could not help but speculate about the possibility of more to come out of this small launch. Banking on Musk’s last statement, “see how it goes,” the community believes this could mean Tesla could start accepting Doge payments for the vehicles. Well, all we can do is wait and, as Elon said, see how it goes.

Dogecoin is a Better Coin for Transactions than Bitcoin

In this recent acceptance of Doge payments for Tesla merchandise, crypto enthusiast Elon Musk mentions that Dogecoin is a better coin for transactions than Bitcoin. Tesla CEO opined the same during his crowning of the TIMES’ man of the year.

According to Musk, Bitcoin encourages HODLing, while Doge encourages spending. The billionaire CEO continues that Bitcoin had a low transaction volume but high transaction costs.

Despite this betrayal, Tesla CEO Elon Musk still holds himself as a Bitcoiner. He stated that once the leading cryptocurrency goes green, Tesla will start accepting Bitcoin payments again.