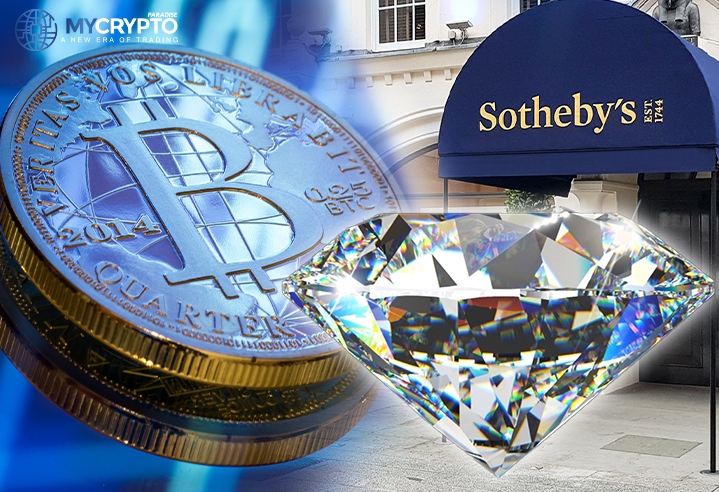 Sotheby’s made news today by announcing that it will start accepting crypto payments in exchange for its rare 101-carat diamond auction for the first time.

Apart from offering the rare valuable precious metal publicly, the British-founded American multinational corporation Sotheby’s announced that together with traditional currency, it will also be accepting crypto payments for this auction. The cryptocurrencies of choice for the 101-carat diamond are ether and Bitcoin.

Sotheby’s July auction will be the first time a rare valuable physical object is being offered for cryptocurrencies. The move goes to show how undeniably digital coins are becoming mainstream.

Sotheby’s auction house has valued this pearl-shaped, flawless 101-carat diamond at $15 million. Buyers who would choose to pay with crypto will have to part with around 7,850 Ether or 465 Bitcoin going with the current value of the coins.

Luxury auction house Sotheby’s has named the rare diamond “The Key 10138”. It will be among ten other diamonds of more than 100 carats to be auctioned. Moreover, “The Key 10138” will be the second-largest pear-shaped diamond to be offered on the public market.

The Most Ancient Measure of Value Meets the Newest Universal Currency

The chairman of Sotheby’s Asia Patti Wong referred to the auction as a “truly symbolic moment.” According to Patti, diamonds, being the most ancient measure of value, can now be purchased using the newest universal currency, which is crypto.

Sotheby’s auction house considered this symbolism even with coming up with the name “The Key 10138.” The deputy chairman of Sotheby’s Asia Wenhao Yu explained the name choice from diamonds being the historic keys for understanding humanity and beauty. The British-founded American multinational corporation Sotheby’s thus combined this historic virtue of diamonds with the present digital keys dominated by NFTs and cryptocurrency.

Although the live single-slot auction for “The Key 10138” is scheduled on July 9, Sotheby’s will open its hybrid online and live bidding process starting June 25.

Luxury auction house Sotheby’s recorded a high demand for white diamonds in the past and is expecting the same for this rare one. Considering that the enthusiasm of crypto traders has been factored in this auction, we can only anticipate what price this rare, pear-shaped, D-colour, flawless 101-carat diamond will fetch.