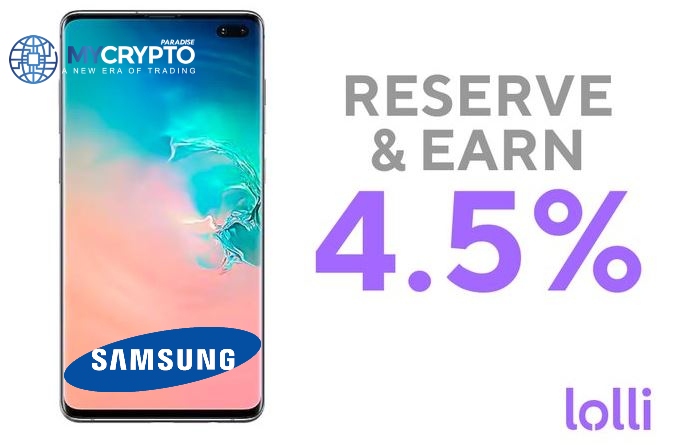 Lolli, an online cryptocurrency-focused shopping app, has renewed its contract with the South Korean electronics giant Samsung before the December festival fully kicks off. Getting your gadgets from the electronic giant can now yield bitcoin rewards via the Lolli app.

According to Lolli management team, users purchasing products from Samsung online store via Lolli app will get up to 4.5% of their expenditure back as a bitcoin reward. The enabling bitcoin use environment is a win situation to the bitcoin enthusiasts.

Lolli has as well-made advances on the technology niches that includes Garmin for the bitcoin reward. Recently, they announced a partnership with one of the leading online cosmetics brands, that is Fenty Beauty. The partnership became public last month, and it is currently a sure deal that shopping with the Fenty beauty via Lolli app yields up to 1.5% reward in bitcoin.

A report indicates that Lolli had their partnership with the China-based e-commerce platform Alibaba terminated back at the beginning of its launch in 2018. Alibaba management claimed that the subcontractors had signed the contract, and that was not per of their terms of operation. The management team at Alibaba was not aware of the joint partnership, hence the termination.

Getting to benefit from the Lolli cost-saving plan, you have to download the official Lolli mobile app. Besides, there are browser outlets that support the Lolli operations that include chrome, edge and Firefox that enables you to purchase through the Lolli platform.

You should note, however, that other unrecognized browsers, coupons and saving apps may lead to Lolli not remitting the payment to your wallet. The traders might not support other sites and apps by the traders since they usually offer reward within a single site at a time.

Shifting to the crypto space falls among the significant reasons why Lolli exists. Reliable report as well has it that the Lolli app is targeted to significant business to create a convenient environment for the use of bitcoins.

I really liked your post.Much thanks again. Awesome.

A big thank you for your blog.Thanks Again. Much obliged.

Thank you ever so for you article.Really thank you! Keep writing.

A round of applause for your article.Much thanks again. Will read on…

Really appreciate you sharing this blog article.Really thank you! Much obliged.

Im thankful for the blog.Really thank you! Great.