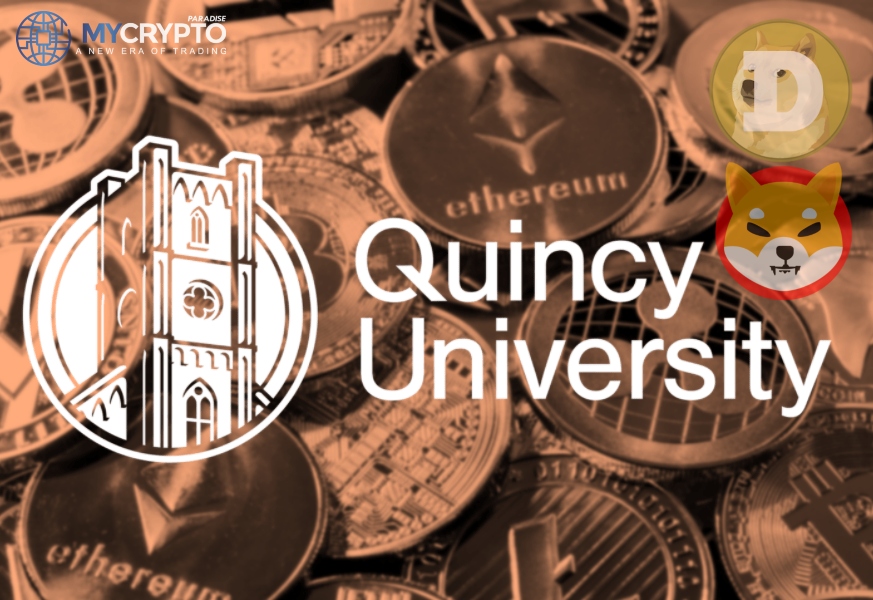 Quincy University, a private Franciscan university in Illinois, has announced that it would now accept donations in cryptocurrencies such as Dogecoin ($DOGE) and its competitor Shiba Inu ($SHIB), both of which are inspired by memes.

The institution stated that as a 501(c)(3) organization, it will receive the full amount of gifts and that bitcoin payments are tax-deductible. On the other hand, tax-deductible donations cannot be anonymous since contributors must disclose their name, address, and email for the gift to be tax-deductible.

The institution will take 32 different crypto assets, including popular tokens such as BTC, ETH, and LTC and meme-inspired coins. According to Matt Bergman, the institution’s senior director of advancement,

“People are increasingly investing in digital currency, and we don’t expect this trend to slow down very soon. QU is continually searching for new methods to make supporting our students and activities as simple as possible for contributors.”

The university noted in its announcement that 46 million Americans own cryptocurrency, accounting for roughly 22% of the adult population in the United States, as the first known cryptocurrency gift to higher education occurred in 2014 when a University of Puget Sound alum donated $10,000 in cryptocurrency to the school.

Last year, bitcoin donations to Fidelity Charitable, the nation’s largest grantmaker, increased by nearly 1,000 percent. Donor-advised funds provided the organization with $331 million in crypto assets, up from $28 million in 2020.

The early DOGE community was well-known for undertaking charitable endeavors. It made waves in 2014 when it raised more than $25,000 in DOGE to help the Jamaican bobsleigh squad compete in the Sochi Winter Olympics.

The first American university to accept a cryptocurrency donation was the University of Puget Sound, which received 14.5 Bitcoin from alumni in 2014, worth about $10,000. BitPay, a payment processing provider, was used to make the transfer.