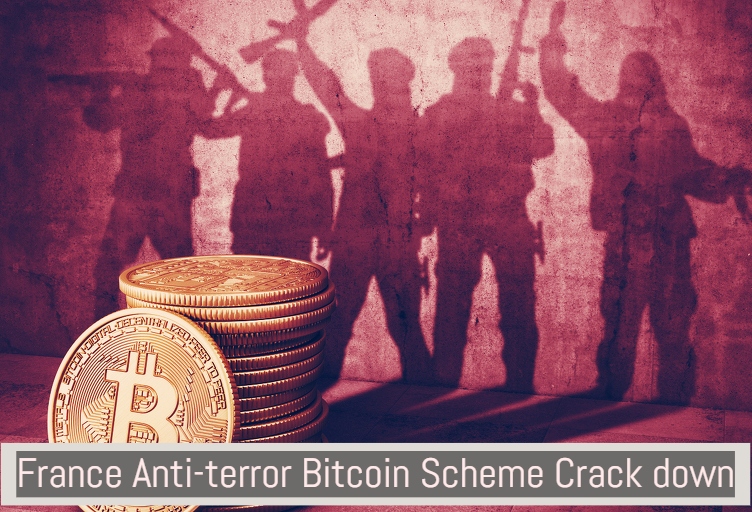 On Tuesday the Paris-French police carried out an operation and apprehended 29 individuals around the country. The operation was aimed at cracking down a complex anti-terrorism bitcoin network scheme for funding Islamic extremist in Syria. The funding was conducted through the aid of bitcoin coupons worth ranging 10 to 150 euros at different Tabacs (tobacco shops) across France. After which they secretly transmitted them to Syria-based jihadist’s bitcoin accounts.

According to statements by the prosecutor’s office, the warrant was only issued against two main figures in the scheme. The French jihadists residing in the Northwest of Syria since 2013, were suspected to be the mastermind behind the creation of the ‘Oethe architecture’ of the sophisticated network of bitcoin coupon financing.

The two namely as Walid F. and Mesut S. both aged 25, were suspected to be a part of Hayat Tahrir Al-Sham a group linked to al-Qaida. In 2016 they were both convicted and sentenced in absentia for nine years imprisonment.

Most of the 29 suspects arrested aged between 22 to 66 and were accused of injecting funds into the network apart from two who were suspected to have had main roles in the cyber funding system, offering logistical assistance to keep the network active.

The use of digital currency by the suspect to finance the extremist group was initially uncovered by Tracfin (French Economy Ministry that traces money laundering, fiscal fraud, and terror financing) because of the anonymity levels it provides to users. Initially, the main methods of financing the extremist were via cash that was sent to people neighbouring Syria, and as the surveillance tightened the group turned to more complex methods that are hard to detect.

French authorities launched an investigation in January when Tracfin discovered a complex network transaction transferring funds to French extremists remaining in Syria. According to the prosecutor’s office, many people in France anonymously buy cryptocurrency coupons that were channeled to the extremist’s account in Syria and converted them to cryptocurrency

Also, the network had received thousands of euros from individuals hiding in the northwest of Syria suspected to be al-Qaida. The extremists associated with the Islamic State group gone under hiding since the death of their leader Osama bin Laden in the 2011 U.S raid.