Exploring the Differences Between Web 2 and Web 3 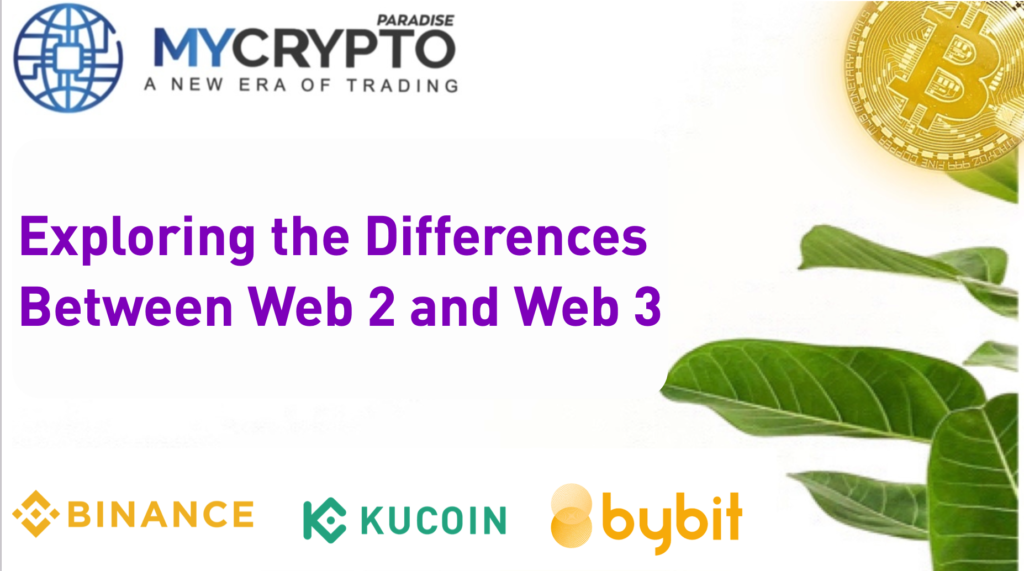 Web 2 vs. Web 3: What’s the difference and why it matters

The usage of dynamic websites, user-generated content, and social media are some of the distinguishing features of Web2, which is often referred to as the “interactive web.” It enables a higher level of involvement and collaboration amongst users, in addition to the capability to personalize and tailor one’s experiences while online.

On the other hand, Web3, which is also known as the “semantic web,” is distinguished by the use of data and metadata that are machine-readable. This paves the way for more interoperability and integration between various systems and platforms. It is predicated on the concept of a model known as “linked data,” in which data coming from a variety of sources is connected together so that it may be accessed and utilized by machines with relative ease.

Another important distinction is the degree to which power is decentralized. The distribution of information and the channels via which it is sent is mostly under the control of a small number of powerful actors on Web2. On the other hand, Web3 makes use of decentralized technologies such as blockchain to enable more decentralization and power distribution. This indicates that Web3 has the potential to provide better levels of openness, security, and resilience, in addition to the capacity to build new kinds of economic and social organization.

Both of these models have their advantages and disadvantages, which makes it difficult to forecast which one of them would “win out” in the long run and become the dominant one. Despite this, it is abundantly obvious that the implementation of Web3 has the potential to bring about significant shifts in the manner in which we access and utilize information online.

Did you know there is an ongoing 20% discount on our ParadiseFamilyVIP, simply use PRO20% as your promo code as the code expires soon.

We have a group of traders (Paradise Team) who are constantly monitoring the market, therefore, whatever the market conditions, you have a higher chance of growing your capital with them, we recommend Binance and Kucoin exchanges for trading BTC, ETH, and other trending altcoins, also we use Bybit exchange for our exclusive BTC&ETH trading, now let’s proceed with the article.

Difference between Web 2 and Web 3

The era of user-generated content began with the introduction of social media on the Web, which was made possible by the development of Web 2.0. In earlier versions, all databases were housed on servers owned by large organizations. The user may have been the data’s “creator,” but they are not the “real owner.”

Since Web 3.0 is decentralized and not controlled by governments and companies, it will have far-reaching consequences for how commerce is conducted, even though it is still in its infancy.

With Web 3.0, data is no longer controlled or stored by a few large corporations; instead, it is privately managed.

Web 2.0 and Web 3.0 have comparable histories and roots but take different approaches to solving problems. The primary difference between Web 2.0 and Web 3.0 is that the latter emphasizes content creation rather than merely consumption (Semantic Web). The latter is superior since it uses technology to promote communication amongst internet users and improves online safety simultaneously.

Web3 strives to merge this data in meaning and increase trust, while Web2 aims to connect people.

Part of the reason for this is that power is spread out to more people. Below is a list of additional distinctions:

Why should we anticipate Web 3?

Web3’s key benefit to users is its decentralized architecture. In the future iteration of the internet, centralized networks will not be rewarded. With publicly distributed ledgers making it easier to see where money is going, democracies can function more honestly and reliably. As a result, business corruption will decline over time. It’s reasonable to assume that Web3 will enhance business and government processes, but the magnitude of the change guarantees that it will be criticized. Among the many potential advantages of Web3, decentralization stands out with:

In Web 3.0, privacy and security will be more important than monitoring and control.

Users will have full access to and management of their information. They can decide to tell others or keep it to themselves.

It will be more secure than earlier iterations of the Internet because of blockchain technology and its decentralized, self-governing design. If a hacker manages to gain access to the network, they will find it extremely difficult to use it. Though most blockchains have built-in safeguards against hacking, it is still possible in a decentralized system.