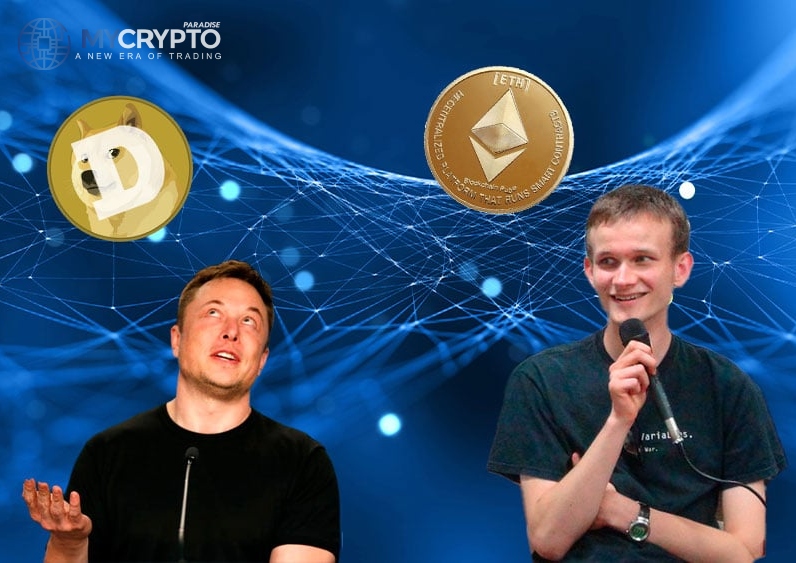 Tesla’s CEO Elon Musk is nowhere near done with shifting the cryptocurrency market with his tweets, even after wide outrage after Tesla’s unanticipated dumping of Bitcoin. Elon’s latest antics are directed to the second-leading cryptocurrency Ethereum and his favorite Dogecoin.

Ethereum co-founder Vitalik Buterin’s interview with AI researcher Lex Fridman has been hot on Twitter the last few days. Of special interest to crypto enthusiasts were Buterin’s comments about how he feels about his cryptocurrency Ethereum and meme cryptocurrency Dogecoin.

Buterin referred to his Dogecoin holding, which he recently sold a part of, as one of his best investments. When asked whether he thinks Doge will ever beat Bitcoin, Buterin responded that it was possible if the meme cryptocurrency would want to “somehow bridge to Ethereum.”

According to Buterin, the Dogecoin-to-Ethereum Bridge would also be a way of leveraging the power and momentum similar to what Tesla’s CEO Elon Musk has on the cryptocurrency market.

Ethereum co-founder Buterin further remarked what seemed to be a defense on Elon Musk’s controversial influence. Buterin believes it will be unwise for traders to read too much and create deep intentionality on Elon Musk’s support for Dogecoin. As far as Buterin is concerned, Musk just likes dogs the same way he likes dogs.

Tesla’s CEO Elon Musk could not resist commenting on this hot discussion. Musk tweeted that he “pretty much” agrees with Vitalik’s Doge and Ethereum collaboration. The idea of fraternizing the second-largest cryptocurrency with Dogecoin is something he will be into.

A section of the crypto market strongly believes Bitcoin’s rise to unreached before heights is thanks to Elon Musk. Dogecoin equally owes much of its success to the Tesla CEO’s support. Ethereum seems to be the latest on Musk’s radar.

It is unknown whether Elon Musk agreeing with the Dogecoin-to-Ethereum bridge was only a passing comment or he will fully support the project to completion. Ethereum is currently transitioning from a proof-of-work consensus model to a proof-of-stake model. Such a time is convenient to start building on Vitalik’s Doge and Ethereum collaboration.