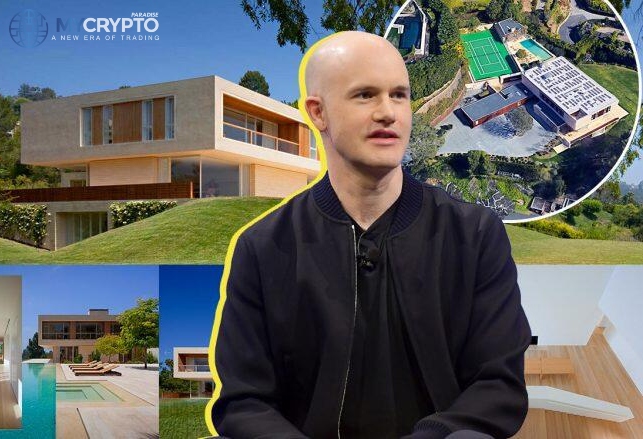 Coinbase co-founder Brian Armstrong started the exchange back in 2012 with Fred Ehrsam. Since then, the crypto exchange has experienced remarkable success, growing to be the largest in the United States with products ranging from custodianship to trading.

Coinbase was the first major cryptocurrency-focused company to go public. After a direct listing in April 2021, Coinbase’s stock took off. Many investors backed Coinbase with the confidence that it would exploit the crypto boom taking place.

At the end of Coinbase’s first day of trading after listing, crypto executive Brian Armstrong was valued at $13 billion. Bloomberg’s Billionaires Index reported that Armstrong’s current net worth is approximately $9.6 billion.

The purchase by Coinbase co-founder Brian Armstrong closed in December 2021. The mansion sits on 4.6 acres and about 19,600 square feet. British architect John Pawson designed the mansion to look like cubes stacked on top of each other. It includes a theatre, spa, gym, a double-height dining room, and a 6,600 square-foot five-bedroom guest house.

The seller Tomita reportedly bought the mansion for $85 million back in 2018 from Ellen Bronfman Hauptman, the daughter of billionaire Seagram’s heir Charles Bronfman. Between November 2020 and November 2021, the real estate industry in Southern California grew by approximately 16%.

Coinbase CEO Brian Armstrong is not the first cryptocurrency executive to dive into the market of luxurious homes. Co-founder of NFT blockchain Worldwide Asset eXchange Jonathan Yantis also bought a 70-acre estate outside Denver for $12.5 million in mid-December.

Binance CEO Changpeng Zhao also bought his first home in Dubai in October 2021. Zhao claims he did not own any real estate before. According to the Binance CEO, he sold his Shanghai apartment in 2006 to buy Bitcoin.