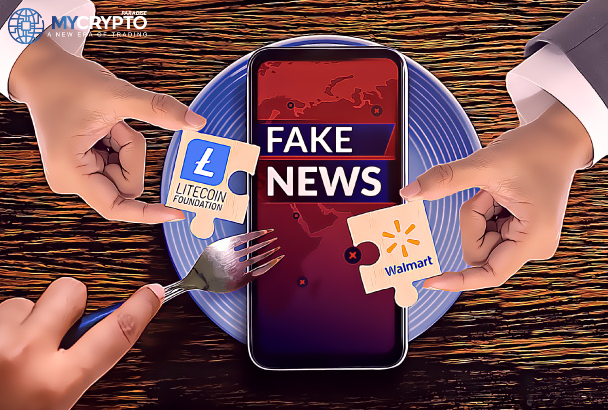 The press release that went out on Monday, September 13, announcing a partnership with U.S. retail giant Walmart and Litecoin turns out to be fake.

The fake news was interestingly detailed to convince the crypto community. According to the press release first published by globenewswire.com, U.S. retail giant Walmart was integrating Litecoin payments in all of its outlets at the beginning of October.

The release featured the CEO of Walmart Doug McMillon, and the creator of the cryptocurrency project Litecoin, Charlie Lee. The release faked the words of McMillon expressing his appreciation of the momentum and excitement around the use of cryptocurrencies.

The release continued that Walmart was offering customers a “smooth checkout experience with near-instant transaction confirmation, and near-zero fees regardless of where in the world they are.”

Specifying the launch date, the press conference declared that starting October 1st, all Walmart’s e-Commerce Stores would have implemented the “Pay with Litecoin Option.”

The official acceptance of Bitcoin payments in El Salvador that saw compliance from major stores like McDonald’s may have gave the Walmart and Litecoin partnership news more believable. Additionally, with this age of social media, what sold the news more was a tweet about the release from an official Litecoin account with a blue checkmark.

Litecoin’s price on the market saw a 20 percent increase once the Walmart and Litecoin partnership news went live. From a price of $175, the cryptocurrency rose to as high as $231. At the time of writing, cryptocurrency project Litecoin is currently trading at $180.50. Evidently, the effects of fake news have not worn off entirely.